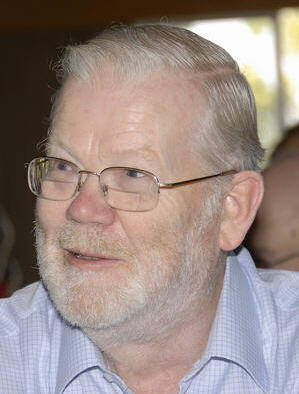 I was born in Hampstead on 13.12.1937. After Eton and King’s (where I read two years of classics and one of law) I practised for nearly 40 years at the Chancery Bar. My classics left me with a lifelong love of Horace, and I was Secretary of the Horatian Society for over 20 years. Other hobbies include Mediaeval carving, following cricket and some gentle boating on the River Alde. When I retired from the Bar (2003) the first project which I could not resist was to publish my verse translation of Horace’s Odes (2005). I found this pushed chess problems to one side (which was not what I had intended), and now the energies which went into composition have been diverted into running a Latin Poetry reading group in Aldeburgh.

I came to problems later in life than most composers, at about the age of 34, and my first composition was published in 1974, when I was 36. At that time Bob Gooderson was the solutions editor of The Problemist, and he gave me a lot of help. I started composing directmate 2-movers, and with Bob’s encouragement developed a liking for correction play (so-called). Later I discovered a lasting interest in making black and white carry out similar moves or effects (B/W correspondence), and this became my most enduring theme. I soon branched out into helpmates, where I realised that the duplex helpmate offered the natural home for my love of B/W correspondence, and the second half of my work is dominated by this form, which, to date, no other composer has explored so closely. I also enjoyed Fairy composing, where my first love was a known but little-worked field, which I christened Superpins. Other Fairy conditions came my way at Andernach and elsewhere, and I found the duplex helpmate well suited to such composing.

(A selection from Colin’s work, arranged under the headings Two-movers, Helpmates and Duplex Helpmates and Fairies, can be viewed on the following pages. They are all his personal favourites, though not all of them are his best known. – Ed.)